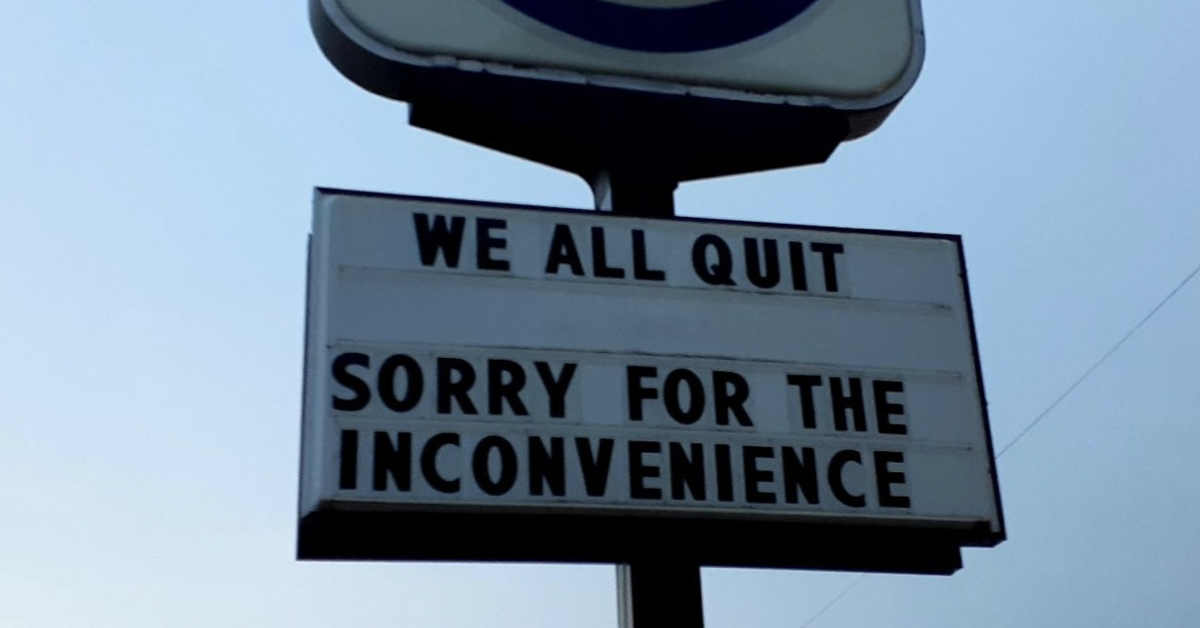 And when good employees quit, it’s hard for those same leaders not to take it personally. An unexpected resignation letter can feel like a betrayal.

But before you place the blame solely on the newly departing and reframe your past history to try and spin them as less valuable than they really were, consider some of the reasons good employees quit. It’s often not that the company did everything for them and they didn’t appreciate it. It could be that the company didn’t do enough to avoid some easily preventable reasons good employees quit.

Here are the top six reasons high performing employees depart, and what leaders can do about them.

The first reason good employees quit is simply burnout. Good employees tend to be overworked and underappreciated. Over-burdening good employees isn’t intentional, but it is logical. The old saying rings trues “If you want something done fast, give it to a busy person.” And if you want something done well, give it to a top performer. But unfortunately, that can lead to more and more critical tasks being assigned to higher performing employees—even as uncritical tasks aren’t being reassigned to others.

As a leader, pay attention to the load each member of your team is carrying. Make sure if you’re adding new tasks that you’re also thinking about any old, less important tasks that are still part of that person’s job description.

The second reason good employees quit is boredom. Boredom is the opposite problem of burnout. While burnout is a quit trigger for stressed employees, removing all stress from someone’s work doesn’t help them either. Researchers call the optimal level of demand on someone’s abilities “eustress.” The goal should be to match the difficulty of tasks assigned to each employee with the abilities of that employee. And as individual’s grow their skills, giving them the same assignments over and over is going to lead to boredom.

So just like you’re watching to make sure great employees aren’t overloaded, make sure you’re also giving your team stretch assignments that help them grow and keep them inside the zone of eustress that keeps everyone engaged.

The third reason good employees quit is bad managers. It’s said often that “People don’t quit bad companies, they quit bad managers.” But that’s not exactly a comforting maxim to hear when good employees are resigning. And it’s not quite true. Top performers do tend to flee quickly from companies with poor leadership, but that could be because of leaders at other levels in the organization.

And while you consider yourself a good boss, part of your job may be to shield your team from bad bosses elsewhere in the organizational chart. This could be by keeping them safe from the increasing demands of senior leaders, or it could be by fighting for the team to get the resources or respect it needs to perform better. It’s not a pleasant part of the team leader’s job, but it can be a vital element of it if leadership elsewhere is failing.

The fourth reason good employees quit is better pay. This one is kind of obvious. When top performing employees feel they are underpaid, they look to rectify the situation—most often by looking elsewhere. If other companies are paying more for the same (or less) work, then wanting to make the switch and take the extra cash is a natural reaction that’s hard to blame anyone for having.

And if you’re a middle manager, there’s not much here you might be able to do. Certainly, you can fight for getting your people a pay raise. But if you don’t win that fight, you still may have more options. Research suggests that a thorough explanation of why an individual’s pay is set where it is—including what the organization can afford and why—can often decrease that individual’s intention to quit. It may not solve it forever, but it may buy you the time to find the extra compensation.

The fifth reason good employees quit is for better opportunities. Like better pay, this one is logical and mostly blameless. One of the talent challenges established companies face is that if the company isn’t growing, the organizational chart is stagnant. This means that top performers who are ready for new challenges, often must wait for those higher in the hierarchy to move. Instead of waiting, many rising stars choose to continue rising somewhere else. And unless they can find vast sources of new revenue that trigger a hiring spree—there isn’t much middle managers can do.

But if you’re having honest conversations with your team, you can sense the desire for bigger opportunities in certain teammates—and then you can work to help them grow into those new roles. Even if they don’t stay with the organization, they’ll be leaving with a much better impression of the company and of you.

The final reason good employees quit is a “blah” purpose. Truthfully, “blah” probably isn’t the best word but since we had five out of six reasons starting with the letter “B”—it just made sense to go for it. Many organizations struggle to truly define their purpose—favoring grandiose sounding mission statements over simple explanations of why their work matters. But top performers—in fact all performers—want to do work that matters and work for leaders who tell them they matter. And unless organizational leaders can transform their vast vision into specific day-to-day actions, then it’s hard to help those performers feel purpose.

The fastest way to transform a vague mission statement into a specific purpose is to transform a “why” into a “who.” As in, “who is helped by the work that we do?” Letting people know how their work helps others—customers, colleagues, stakeholders, or society—is a powerful way to help them feel intrinsic motivation on the job. And it’s a great way to keep them on the job.

There are certainly more reasons good employees quit than these six. But these six represent the intersection between the felt emotions of good employees and the untaken actions of team leaders. If too many good people are turning over too fast, consider these six reasons as starting points for making adjustments as a leader. You may not keep good employees from leaving forever, but you will create an environment where they can do some of the best work they’ve ever done and will reflect on you as one of the best leaders they’ve ever had.