A Company Is Not A Family 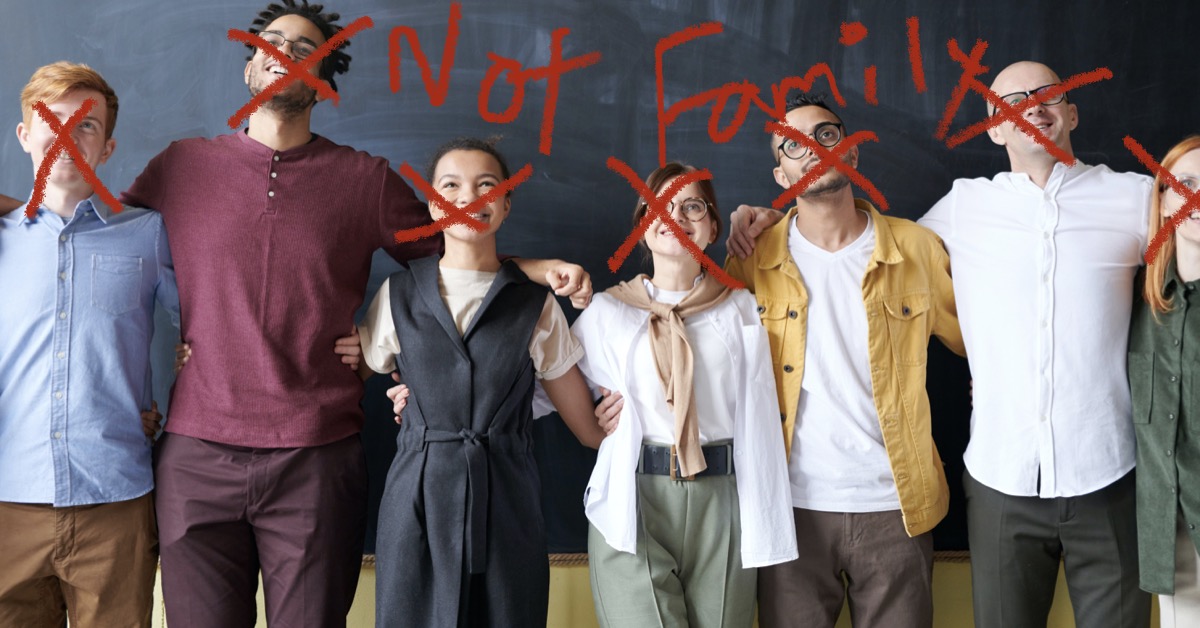 It’s unclear where the metaphor got started. In fact, it probably didn’t start as a metaphor (“we are a family”); it probably started as a simile (“we are like a family”). Some well-meaning executive somewhere described the company culture as feeling like a family. (That a high-powered CEO would feel like the paternalistic chief of anything is a dilemma for a different article).

Over time, more and more corporate leaders started using “like family” until logically one decided to take it to the next level and skip the “like” altogether boasting “we’re a family.”

But a company is not a family.

And further a company shouldn’t be a family.

When companies began to overuse the family analogy, results are rarely positive. Instead, pushing for family levels of commitment can actually do damage to the culture. And in this article, we’ll outline the ways that the “family” metaphor can lead to dysfunction. As well as the steps team leaders can take to transform their dysfunctional fake families back into the thriving work teams they were trying to build in the first place.

What Happens When We’re “Family”

Misusing the “family” metaphor at work can lead to several ways employees get abused. Three in particular stand out.

Many of the organizations that emphasize the family feel end up taking actions that blur the lines between work and life for most employees. This was seen much more often before the pandemic, when companies flouted free food, dry cleaning, endless parties, and all sorts of amenities designed to make life as easy as possible—as long as you never left work. But that became a problem unto itself. Employees never left work, opting to spend more and more time with their “work family” but never getting the downtime needed to be sustainably productive.

Committed Employees Get Taken Advantage Of

When companies or even team leaders overemphasize the family metaphor, the next logical step is asking for family-level committed from employees. This creates a lot of opportunities for leaders to take advantage of employees. One project after another gets taken on, without considering existing commitments and making it difficult for employees to say no. Beyond overload, overcommitted employees can also be asked to commit more and more unethical actions. When the survival of the company—sorry, the family—is a stake, employees can feel pressured to use any means necessary. See Theranos or WeWork for two recent examples.

Departing Employees Get Labeled as Betrayers

If those employees decide the don’t like blurry boundaries (around work and life or around ethics) and choose to move on—that creates a whole new issue. In organizations that overemphasize family, it becomes easy to label to departures as a form of betrayal. It’s not uncommon for companies to cut off all communication with former employees and instruct their people to do the same. Beyond being just plain wrong, this mindset can actually limit a company—since research shows former colleagues that stay connected become potent sources new knowledge for each other and their new employers.

The intent behind labeling a company as a family might have been noble. We want a strong culture or people bonded to each other and pushing each other to new levels of performance. But if that’s what we want, what’s wrong with just calling that a team? Strong teams deliver exactly that. And whether you’re in a company that’s abusing the family metaphor or not, here’s a few actions you can take to build a stronger team.

One of the reasons for choosing the family metaphor was a poorly executed attempt at bonding teams and organizations together. But just saying you’re a family doesn’t build bonds. Instead, research suggests that one of the most potent ways to bond a team is by pointing to superordinate goals—goals so big they require collaboration. And for organizations, the superordinate goal is most often the stated purpose or mission. But even here, there’s work to be done. Most organizations write lofty mission statements that are difficult for employees to connect with. It falls on team leaders to translate that lofty purpose into one that bonds and motivates. And the best way to do that is to redefine it from a big and bold “why” (why do we do what we do?) to a specific “who” (who is helped by the work that we do).

Despite what it may seem like at first, committed employees isn’t always a positive. The line between committed and overcommitted people is incredibly thin. Many managers think they want people who will work until the project is done—arriving early and staying late if need be. But the truth is that in a modern economy, work is never done. So, the only way to stay sustainably productive is to make sure every employee enjoys down time as well. More and more companies are experimenting with ways to encourage boundaries such as forbidding after hours email, moving to four-day workweeks, and even paying people to take their vacation time. And results all suggest the same thing: time away from work makes work better.

No matter how committed employees are some of them will move on. New opportunities present themselves. Life changes happen. And so do plenty of other reasons for an employee to look elsewhere. In the face of this inevitability, treating departures like betrayals never made sense. Instead, departures ought to be celebrated. Employees who leave on good terms ought to be seen as alumni representing the organization even in their new endeavors. In addition to information, departing employees become a powerful new source of referrals for new hires too. There is no better recruiter than a satisfied former employee now working in a new company talking with their potentially dissatisfied new colleagues. In addition, treating employees well as they’re departing has a motivating effect on the employees who stay, as they watch how positively their former colleagues were treated and trust that they’ll be treated the same one day too.

Calling your company a family, may have been a well-meaning metaphor, but it hasn’t been a very useful one. Most employees don’t want a dysfunctional family. They want a team that’s bonded through purpose and built on trust and respect. They don’t want to be seen as family one day and divorced family the next. They want to know their contribution was valuable even after they leave. They don’t want leaders who overcommit and abuse them.

They want leaders who help them do their best work ever.